Ahhhhhhhh… The run up to October half term, we love it. The air is crisp and the nights are drawing in; excitement about the thought of one or two weeks off school is all around and the prospect of Halloween fun and Bonfire madness looms.

We hope that your first half term has gone really well and that you have been able to slip back into school life easily. In this issue we get advice from our Counsellor, Cathy Salvi, as she talks about the changes that Autumn brings and some tips for the month of October. We will delve into the mysterious world of natural phenomena….. try getting your parents or siblings to spell the word phenomena ( pronounced – finomina). We explain all later on….

Spooky October lends itself to mystery and unpredictable weather, so make sure you are wrapped up warm. Take a look at how best to dispose of your unwanted winter coats in our charity section and try our lovely winter warmer soup recipe.

Make the most of your half term holiday, enjoy it and have fun! There are no educational activities this issue, have some fun and we shall see you in November.

Nobody can fathom her, some have studied her, some have tried to defeat her, but Mother Nature will win out in the long run. Here are some of her most fascinating mysteries and naturally occurring phenomena. By the way, phenomena means a remarkable observable fact or event.

Glowing water, that cannot be true, I hear you say. After the sun goes down, schools of fish can be seen glowing greenish-blue in the water in Thailand. What a wonderful sight. There are several places on earth where plankton lights up the water. Bioluminescent plankton, can you believe that?

Love surfing? Well very occasionally when the moon is full in February and March, there is a spot where the Amazon River meets the Atlantic Ocean and here  you can find waves that reach up to 13 feet high. Surfers flock to the sea, jumping on their boards. The local people would not dream of entering the water at this special time as they fear the fantastic force of the waves. Though there are many theories as to why they are called pororoca, one of the most popular is that it comes from “poroc-poroc” which in the indigenous Brazilian language of Tupi means “great destructive noise”. There certainly is a wonderfully loud noise when these two great beasts meet.

Raining blood….. absolutely not! In India there have been many reports of blood red rain falling from the heavens. The 2001 spotting in Kerala, India was likely one of the most well known. The red rainfall was not an extraterrestrial intervention as many believed then, instead it was caused by the presence of spores in the air and red algae coming from the ocean. Turning the normal rain a beautiful red colour. Mystery solved…

Unexplained moving rocks….only in Death Valley, America. One of the least inhabited places on the planet is Death Valley in California. Here you can see sailing stones, these are rocks found at the end of a track in the sand. The track suggests that the stones were able to move. With no scientific explanation for this geological phenomenon, the sailing stones remain a mystery.

Zimbabwian moonbows are a very rare phenomenon, they are not classed as a rainbow but a moonbow. The cause is a reflection of moonlight instead of sunlight. Autumn and Spring give the best examples. The best places to see these moonbows are close to waterfalls like in Yosemite National Park, California, Corbin, Kentucky or Victoria Falls as well as in Africa on the border between Zambia and Zimbabwe. They make the most beautiful picture. Magic!

Denmark is the home to a phenomenon called ‘Sort-Sol’. This is the black cloud of birds who take to the skies in March and April. At this time in the southwestern marshlands of Denmark, one million birds flock to the skies during sunset and the sun is actually blocked by the birds, hence the name black sun. Beautiful to watch and amazing to listen to…

Have you heard of The Aurora Borealis? This is an optical phenomenon which manifests in the atmosphere showing green, blue or red in the night sky. We now know that this is caused by the interaction of charged particles (protons and electrons) from the sun with the Earth’s ionosphere. Imagine if you were early man or woman looking up into the night sky, this would have been a truly amazing sight. Apparently the phenomenon is more intense during periods of high solar activity. Definitely worth a visit to Norway to catch a glimpse of the green glittering skies. 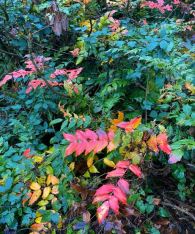 Cathy Salvi our resident counsellor and teacher from the Surrey Learning & Counselling Centre.

Well done, you have completed a whole month of this academic year !!!

I bet it was difficult seeing all the changes at school but you did it with Positive Thinking and Positive Actions.

The weather is changing and Autumn has arrived, more rainy days and cold, dark early mornings.

Enjoy the Autumn and try to notice the beautiful changes in colours. They are there as a reminder that change happens every day before our eyes.

Positive thoughts and actions for October. 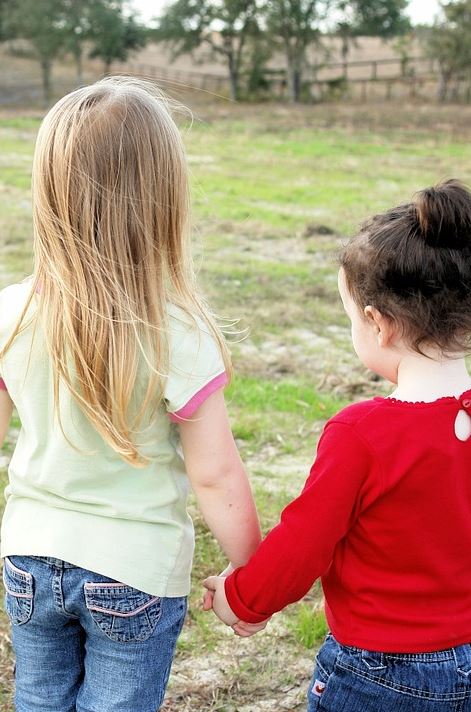 Cathy’s acrostic poem for the month of October.

O – organise your book bag before you go to sleep,

C – care about yourself e.g. eat healthily, get plenty of sleep and rest,

T – talk to your friends and parents e.g. when you are sad, angry and happy,

O – open-minded when things are out of your control e.g. CV-19, school work,

B – be brave and do your best,

R – Remember you are in control and will always do your BEST.

Every year Wrap Up London collects your old, unwanted coats. You pop your old coats into a box, pop on the free postage label and take the box to your nearest pick up point. Your coat travels to the Wrap Up London HQ and gets sorted. Its journey then begins… your coat will end up helping someone stay warm this winter. Coats are given to those who have no fixed home, families who are living on the minimum wage, refugee’s and the elderly.

A little piece from Wrap Up London:

Once we’ve collected coats from the public, the volunteers get to work at our sorting sessions. We spend many hours sorting coats into different piles for men, women, children and babies. We check pockets and make sure the coat is in good enough condition to be given away. 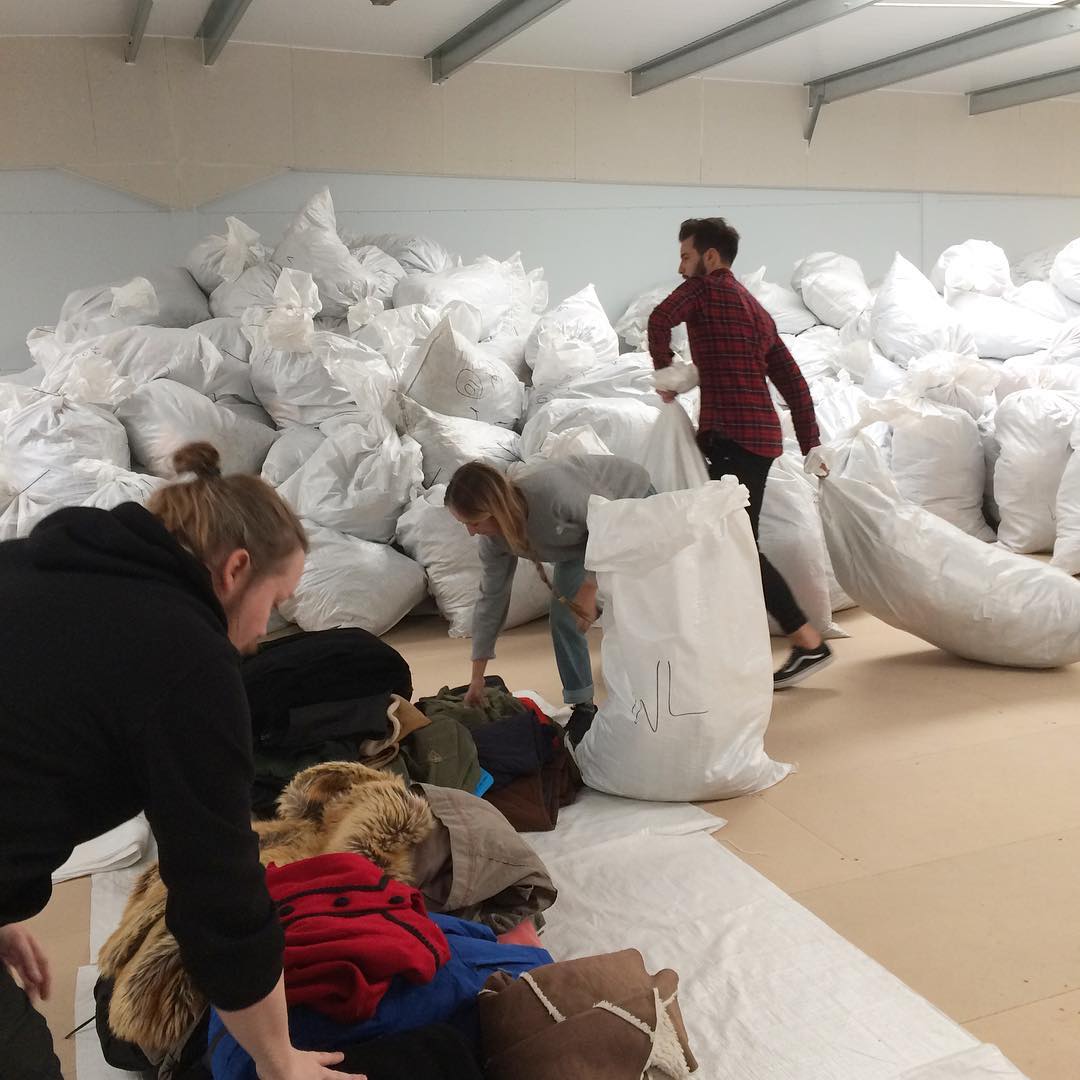 In December, the sorted coats will be distributed to charities across London. We work with charities and community organisations that provide frontline services to the homeless, the elderly, refugees, children and families living in poverty and people fleeing domestic violence. These coats are intended for people, not charity shops. If you can help us transport the coats from Safestore to one of our charity partners, get in touch today.

Wrap Up London don’t distribute the coats to those in need directly, because we want to help charities create lasting exchanges with those they set out to help. So when a vulnerable Londoner reaches out to a charity for a coat this winter, they will also discover the other resources and forms of support available to them.

It’s amazing that a coat YOU donated could kick-start a relationship between those in need and the charities that can help them by providing year-round services and support.

Wrap Up London is now in its ninth year, and our impact continues to grow thanks to the Londoners who take the time to find and donate their old coats, and the incredible volunteers that give their time. Our campaign is run by a small team of hardworking volunteers organised by the registered charity, Hands On London. Click here to read more about the work that Hands On London does.

Get an adult to help you dice the onions and carrot.

Melt the butter in a large saucepan.

Add the onion and carrot and cook for approximately 5 minutes.

Add the flour and cook this off for 2 minutes.

Add the stock and milk, bring the mix up to a simmer.

Dice and add the chicken and cook at a low simmer for 10 minutes.

Add the uncooked pasta and cook for the stipulated length of time on your pasta. Add the frozen peas, check the consistency of the soup at this stage, if it has thickened more than you would like thin down with a little more stock. Cook for 1-2 minutes to ensure the peas are heated through.

Season with salt and pepper if needed. 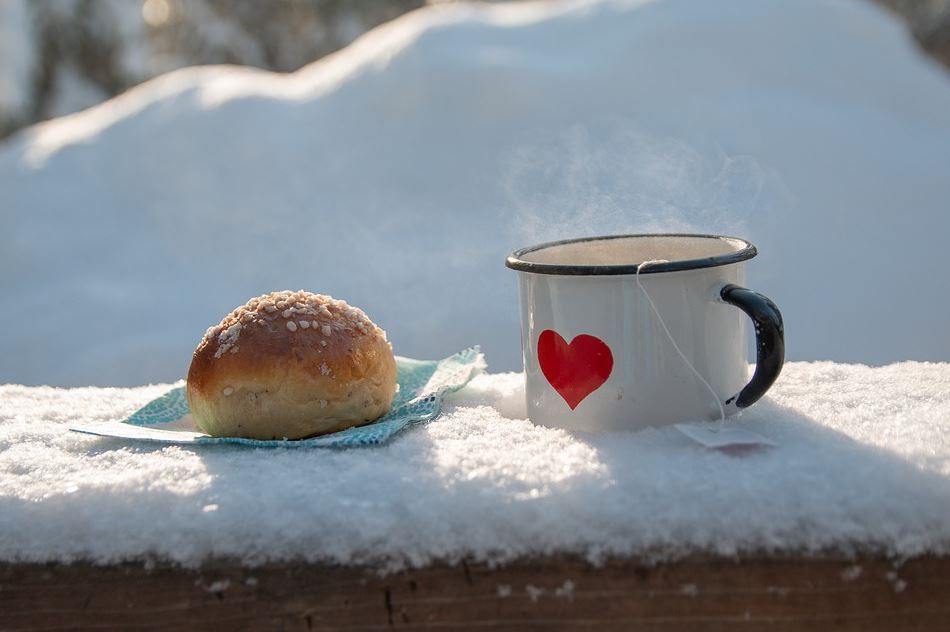 Winter picnics can be just as much fun, although you need to wrap up warm and make sure that the food you take with you will keep warm. Make sure you have plenty of cosy clothes, some chairs or a waterproof blanket to sit on and a hot picnic. A great idea for hot food would be to make a chilli and place this in a soup or food flask, take some pitta breads and then make the chilli pittas when you are sitting comfortably at your winter picnic venue. Or how about a nice hot soup just like our Chicken and Pasta Soup? You could just add some cooked hot dogs into a flask of hot boiling water, take your hot dog rolls and sauces and then get an adult to very carefully fish out the hot dogs, dry off with some kitchen towel and place them in your roll….. mmmm. Don’t forget to take some outdoor games with you. Or depending on the location of your picnic you could also take a small fire pit… 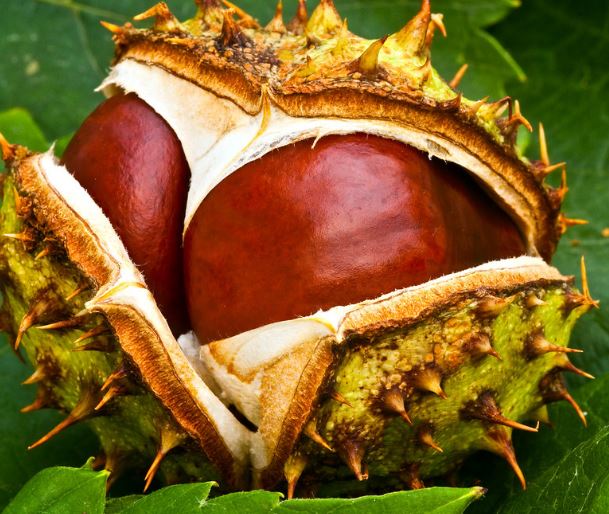 Conkers are the fruit of horse chestnut trees.

Conkers release a chemical which spiders hate and can stop them entering your home.

The first ever recorded game of conkers took place in 1848.

Conkers can be kept with your woollens to stop moths nibbling them. 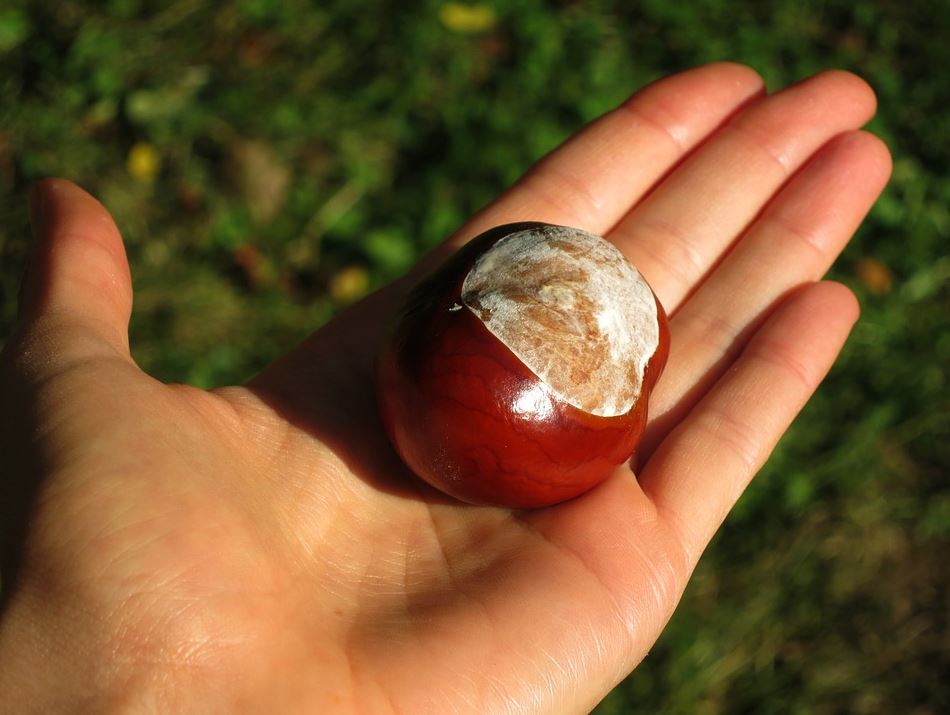 Thought for the Week

Why not write a story about a conker?  Where did it grow? How did it fall off its tree? What happened to it when it landed on the floor? Did your conker have any exciting adventures? Or you could read a book about conkers. One such book is the ‘The Conker as Hard as a Diamond’ Written by Chris Powling.